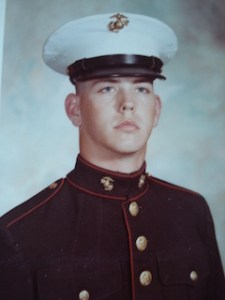 “The American Village is pleased to join the Shelby County Reporter in recognizing Major George Dixon Kendley as Veteran of the Week,” American Village founder and CEO Tom Walker said. “He is representative of the hundreds of thousands of Alabamians who have risked it all for the sake of our country and its freedom. To all veterans we owe a debt we can never fully repay.”

George Dixon Kendley was born in Panama City, Florida, in 1955, and later called Daphne his hometown. He is a member of the first all-volunteer Series at MCRD Parris Island, S.C., in 1973. He spent 24 years in communications, data and electronics – originally trained as a radar and computer technician. He moved 20 times in his 24 years on active duty with the United States Marines. He began service in 1973, and through a guaranteed PFC program/Platoon High Shooter, graduated from Boot Camp as a private first class. He was selected as a Warrant Officer-1 in 1980, a Limited Duty Officer (LDO) in 1984, and was promoted to Chief Warrant Officer-5 in 1994. He chose to revert to Permanent LDO Major in 1995. Kendley earned three degrees while on active duty – a AA, a BS and an MBA. He was awarded the Defense Meritorious Service Medal, Meritorious Service Medal, Navy Commendation Medal with 1 Star, National Defense Medal with 1 Star, USMC Good Conduct Medal with 1 Star, Sea Service Deployment Ribbon, Meritorious Unit Commendation with 2 Stars, Overseas Service Ribbon with 1 Star, Rifle & Pistol Expert. Kendley finished his service in the USMC in 1997.