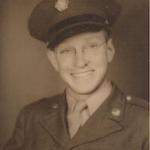 “The American Village is pleased to join the Shelby County Reporter in recognizing Private First Class Merrell Benton Adams as Veteran of the Week,” American Village founder and CEO Tom Walker said. “He is representative of the hundreds of thousands of Alabamians who have risked it all for the sake of our country and its freedom. To all veterans we owe a debt we can never fully repay.”

Merrell Adams was born in Winston County, Alabama, in 1924. He entered service in the U.S. Army in May or June of 1944. After basic training he was sent to France in July 1944. He was with the 115th Inf. 29th Div. and was killed near St. Lo, France on Aug. 4, 1944. Adams was interred in a temporary military cemetery in France and in September 1948 was shipped home aboard the “Lawrence Victory” to New York and by rail to his home in Alabama, arriving Sept. 22, 1948 for reburial at Shady Grove Church in Double Springs.